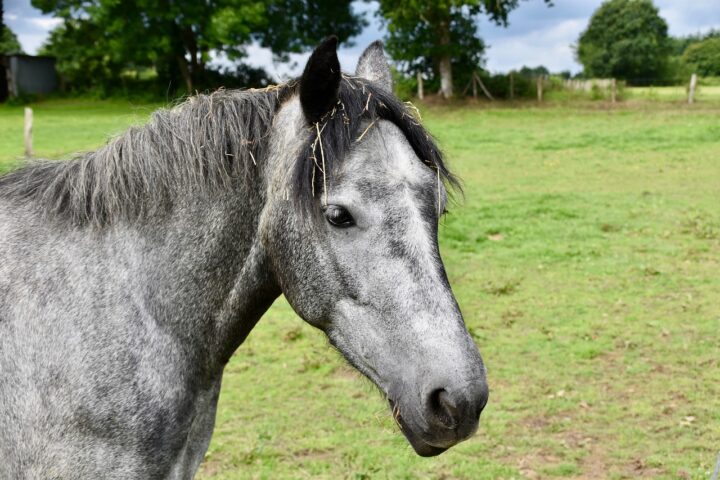 Gray horses are arguably one of the most beautiful colors of horses that you can find. With just the right amount of white hairs to black hairs to create this unique color that can range from dark to silvery, glistening in the sun.

For many years it was believed that gray horses were genetically bad. Gray horses were considered to be ‘diseased’ and as such they were not favored, nor were they bred to create more. They were a product of Mother Nature and natural selection, not of man.

Leading to the strange belief that they were diseased horses was the fact that roughly 25% of these horses will develop benign lumps and melanomas in their lives, particularly as they age. Underneath their gray coat is black skin. This may contribute to the skin tumors that develop but no one is entirely sure.

A true gray horse can have white hair, but will have black skin underneath and this identifies them as truly gray horses. A true white horse will have pink skin. These means that even the famous white Lipizzaner stallions are really gray because they have black skin.

In fact, a dark gray foal stands a good chance of being white as an adult because these gray horses tend to turn lighter in color as they age. By the time they are very old, they will be very white.

Gray is now one of the more common colors in horses and it is estimated that one in ten horses carries the gene for the coloration. A gray foal may actually be born in any color, such as chestnut or bay, but white hairs will begin coming in around the chin area. This is typically the first clue that a gray adult will be had.

Dapple gray is a beautiful coloration of the horse which results in a splotching of the coat where darker gray is mixed with spots of lighter gray and sometimes some white or silver. Sadly, many of these horses end-up turning very white in the end.

It can be very confusing to the non-horse person to understand how these colorations and genetics work. Some true horse enthusiasts don’t even understand it all unless they breed these particular types of horses.

The gray gene is a dominant gene in horses. It wasn’t until 2008 that researchers were able to identify the gene that causes the gray horse. This coloration is considered a mutation, so scientists were seeking answers to the mutation.

There is a large interest in this mutation because it also seems to run hand in hand with developing melanomas of the skin. Scientists believe that if they can identify the gene, they’ll be able to also identify the cause of the skin cancer.

In mythology, gray horses have often been said to prophesy or forewarn of danger. Sometimes they are depicted with multiple heads, and we all know of the unicorn myth, which is most often depicted as the white cartoon horse, but you now know that white horses are usually gray horses, truly.

Horses are the basis of many myths and much history. Man and horse have had a close bond and relationship since the dark ages of Europe. Knights were carried on large steeds who could handle the heavy weight of armor. These were typically Percherons, which also tend to be in grays and dapple gray coloring, with black skin underneath.

They turn silvery-white as they age, with feet the size of basketballs, the Percheron is often depicted in art from medieval times.

Many breeds can come in a gray color variation. These include quarter horses, thoroughbred horses, Lippizaner, Percheron, and Arabians. Since the horses are often white in appearance, they’ve been known to cause the occasional uproar at the border or in customs when crossing.

The officer with no horse knowledge is looking at papers that say gray and a horse that looks white. It can be a bit of a hassle if you are often transporting a show horse that is gray.

Regardless of the myth, these horses don’t seem to be diseased or any less healthy than other breeds. They do have a tendency to develop skin melanomas which are not always cancerous. Many times they are benign. It is still a mystery but hopefully one that science can unravel in time.

The Myth of the Gray Horse

The History of the Marwari Horse