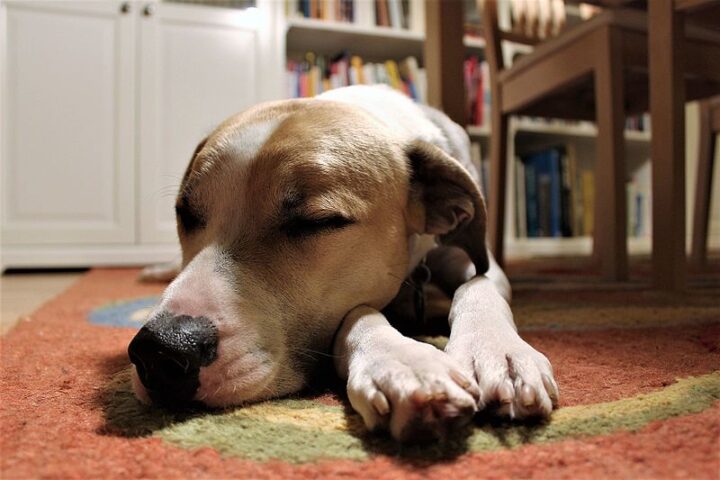 Dogs have traits and responses to outside stimulus that would appear to be hereditary. For example, when they feel threatened, their hair stands up. This is called piloerection and the reason for it is to look bigger than they actually are.

The premise is that if you look bigger, you may be considered too much trouble or risk to attack by another animal. This is actually a fear response but happens when the animal goes on the defensive. This is the end result of making the choice to fight, in the fight or flight instinct. When you choose to stand your ground, you do your best to make yourself look tough. This is piloerection.

When dogs have a treat that they really want but aren’t hungry right at that moment, they will often attempt to bury it or hide it somewhere. This is instinctual and it may be  stronger instinct in some dogs over others, depending upon their breed. Hunting dogs may be more prone to hiding or burying bones or treats, for example. This isn’t the case 100% of the time. Personalities also play into this.

Instinctual behaviors can be both learned and genetic. Piloerection, for example, is not something they have to consciously decide to do, it simply happens. Therefore this is a genetic trait or ability that dogs have. Some dogs will piloerect their fur more easily than others.

Hiding food is a learned instinct. This was likely learned with littermates and from mother. If you want to keep something and you have siblings, you learn to hide it. It becomes an instinctual habit with repetition. Dogs are also opportunistic creatures – if something works well, they will repeat the behavior. They can teach other animals the things they have learned because they observe each other closely. This is a very interesting part of animal behavior.

Animals don’t really have a language that is spoken. They do make sounds, some of which we know how meanings but these are generalized. Whining is an indication of sadness or frustration, but without visual observation, you cannot begin to understand why they are whining.

When something results in a positive outcome for them, such as receiving a treat or reward, they are highly likely to repeat this behavior. In time, repetitious behaviors can become instinctual. To make this easier to understand, think about the training that martial arts experts do for their entire lives.

Eventually, they react without thinking. The movements have become instinctual and they no longer rely on the impulse to run, they rely on their body to instinctively know what response is necessary.

Sleeping with the eyes open is believed to be a behavior that some dogs have developed to stay safe when in a deep sleep. Fear of predication has enabled them to adapt their behavior to sleeping with an eye open for their own safety. This is likely not the only behavior that dogs have adapted to making certain that they are safe. In fact, most behaviors are geared toward survival.

Size of an animal if left to breed on its own without interference from man, they will adapt to fit their environment. For example, when there are competing predators in the same area, they will change over time to become stronger or faster, bigger or smaller, depending on what makes them better able to survive.

Some animals adapt their behavior to better survive and these things become instinctive and genetic because only the animals who have adapted in this fashion will survive. In time, the only animals breeding and surviving are those who exhibit this particular behavior. It becomes genetically encoded.

Instincts Are About Survival

Darwin wrote about instincts, survival and adaptation in the “Origin of Species” which is one of the most profound works of science as it relates to the animal kingdom. Adapting to the environment ensures survival and when animals don’t adapt, they do not survive to continue breeding.

Darwin noted the changes in the beaks of birds and how this correlated with the food sources available to them. Birds with shorter beaks tended to eat ground foods and berries. Birds with longer beaks were more prone to reaching into flowers or into the the deep recesses of plants or trees to find bugs or worms.

Dogs have adapted to their environment in similar ways. Dogs from cold climates have grown thick coats, some with double coats that grow in thicker in the winter months. Malamutes are a breed of dog that grew to adapt to the coldest weather. They have large paws to walk over the snow, stamina and strength, as well as size to protect themselves and survive in harsh climates.

Dogs have also adapted to do things like sleeping with eyes open, for protection. Not all dogs will do this and not all of them will do it 100% of the time. Sometimes, when they are in a very deep sleep, it is sometimes noticed that one or both eyes are open. They are not aware they are doing this. It just so happened that at some point in time, that dog’s ancestors survived because of this ability, so it was passed genetically to your dog as well.

Dogs are an animal that has been largely manipulated by mankind in breeding programs that were designed to create better hunting dogs, working dogs, watch dogs, guard dogs, athletic dogs, herding dogs, and even better dogs at just sitting in laps of humans. Dogs have been selectively bred for the type of fur they have and dogs are bred for their sense of smell too.

Hunting breed dogs include Beagles, Labrador retrievers, Nova Scotia Duck Tolling retrievers, German Shorthaired Pointers, Weimaraners, and many more.  These have been bred for specific abilities. Beagles often hunt in packs that bray loudly while chasing their prey. Beagles will chase rabbits and foxes. Their stamina is incredible and they are bred to wear the prey out, then bark and bray until hunters catch-up.

Labrador retrievers, on the other hand have been bred to bring prey back to the hunter. They make especially good duck retrievers because they’ve also been selectively bred to have coats that shed water quickly and have webbed paws enabling them to be strong swimmers. This is also true for Chesapeake Bay retrievers,

Chihuahuas have been selectively bred to be fearless and follow rats right into dens and attack them ferociously. This little dogs believe they are the size of St Bernards. This is why they have the fearless reputations that they are known for.

Herding dogs instinctively like keeping their charges together and accounted for. They have been bred to think for themselves and are extremely intelligent; having a keen ability to assess any situation for danger. Australian shepherds, German Shepherds, Border Collies, Australian Kelpies and many other herding dogs exist, including the Old English Sheepdog.

Other breeds have been selectively crossed with other breeds to create new breeds. A good example of this is the recent fixation with designer dog breeds such as poodle mixes. Goldendoodles, Labradoodles, Bernedoodles and more are dogs that have been crossed to hopefully have less shedding and personalities of both breeds.

These animals all do their jobs slightly differently depending on what they are herding. The Kelpie will often run across the backs of sheep. This is so that it can see predators amongst the sheep. The Australian shepherds are sturdy and less nippy, to herd larger animals such as cattle. These are all adaptations. Behaviors and physical appearance are all things that can be manipulated by gene pool.

You don’t need to worry about your dog’s eyes. They will not get to dry without automatically blinking. Dogs also have eyelids that differ from our own and will protect their eye from matter. The odds of the dog having any injury or issue from sleeping with their eyes open are slim.

Your dog probably won’t always sleep this way and if they are asleep, don’t disturb them as they are in a very deep sleep and should be left alone. You can rest assured knowing that absolutely nothing is wrong with your dog.