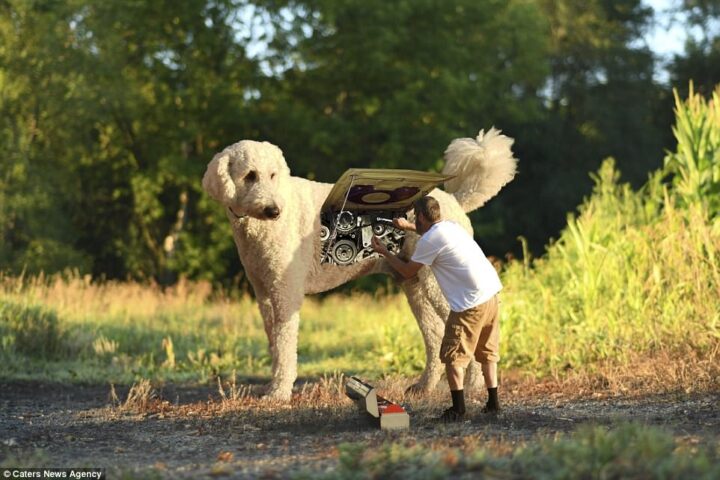 You’ve all seen the Instagram photos of Juji and his owner, sitting on the sofa and watching television. The photos have been shared far and wide on all other social media outlets. Juji looks to be ten feet tall, and twice as tall as his owner.

Juji is just a puppy and the photos first started as a joke on Instagram over a year ago, to make people smile. Juji is a poodle and his owner is Chris Cline, a graphic designer who specializes in working with digital images for his work.

Cline thought it would be funny to enlarge his puppy to make him seem ten feet tall. Juji is really not that tall! In fact, he’s a normal-sized dog, not even bigger than average for his breed.

Cline didn’t realize just how far the photo was being spread until he was out walking his dog and was suddenly being recognized, not him – his dog!

Juji was recognized by the groomer, then suddenly by others. This is when they realized the first photo was shared more than 650K times.

Since this point, Cline and his girlfriend, Christine Fagerly, have done many more photoshoots and he now spends hours working on putting together photos of Juji in his enlarged ‘giant state’ and it’s nearly become a full-time job.

They are making new scenes in which Juji can be the star. He’s already impersonated Jaws in a recreation of the iconic poster, he has flown through the air as the dragon in The Never Ending Story, and he has become an internet sensation whose future looks very bright! Move over Grumpy Cat (may she rest in peace).

Juji is a standard poodle and golden retriever mix, known as a Golden Doodle. Since he’s won so many hearts with his fame, let’s bring you up to speed on this breed of dog.

Golden Doodles are a mix of Golden Retriever and Poodle (usually mini or standard sized). They typically range between 35 and 45 pounds. This makes them a little smaller than a Golden Retriever.

Both breeds are very intelligent and this makes the Golden Doodle a very intelligent breed also. These dogs are also very low shedding. They are not, as some would have you believe, hypoallergenic as poodles are. Some might be if they got those genes, but there really is no way of knowing.

They are easy to potty train, as a general rule. They are very sweet and good with children, taking much of their personality from the Golden Retriever, but the poodle is also known for being a generally good personality and sweet dog.

The Golden Doodle has become a very popular mix known as a ‘Doodle’ mix and is considered a designer breed of dog. They have been used as service dogs and also make excellent emotional support animals, besides being a wonderful family companion. They are happy with a moderate level of exercise and relatively easy to maintain.

Be advised that they will require grooming that clips them short and they do need regular brushings to prevent things from tangling in their fur, which is often curly and easy to tangle.

You can expect to spend a large sum of money to get your hands on a Golden Doodle. They could be $1500 on the low end and several thousands of dollars on the high end. It depends largely on whether your doodle is a first-generation doodle or not.

These dogs tend to be very healthy, adaptive to different types of environments, and able to learn virtually anything you take the time to teach them. This is why they are so popular as service dogs and emotional support animals.

Therefore, if you are trying to get a dog that will be as smart and camera-friendly as Juji, you might get lucky but you’ll have to be skilled at digital imaging as Juji’s owners are too.

If you just want a fantastic dog for your family, you’ll most definitely get lucky with this breed as they are wonderful, entertaining, and loving. Do beware that they have a high amount of energy to burn-off and will need to get daily exercise to keep them happy and healthy.

Feed your dog well, don’t give them high-fat meals or things from your plate. Ensure that they have a well-balanced diet to keep them in top condition and ensure that they live to be a very old dog. Speaking of age and longevity, you can expect your Golden Doodle to live anywhere from 12 to 16 years of age.

As with humans, there is some variation in the age they may live to because so much depends on their genetics. Finding out how long their parents or grandparents lived to can be helpful in knowing possible longevity for your pup.

Juji has made Golden Doodles even more popular than they ever were before. It’s likely that there will be a high demand for them in the future, for many reasons. They really are just as cute as Juji is and they might come in other colors too.

You can find Golden Doodles in very pale cream to a darker reddish color, depending on the color of the poodle they are bred to. They can even be a darker chocolate color when bred to a chocolate poodle. Most Golden Doodles do tend to be more of the Golden Retriever color, however.

There are very likely many families out there right now who are seeking a Golden Doodle, thanks to the hilarious photos of Juji and his owner. Be on the lookout for them in the future, as they are working on more photoshoots and getting more and more creative with them.

As for Juji, he’s enjoying his newfound fame but still goes on daily walks around the neighborhood, just like a regular guy.