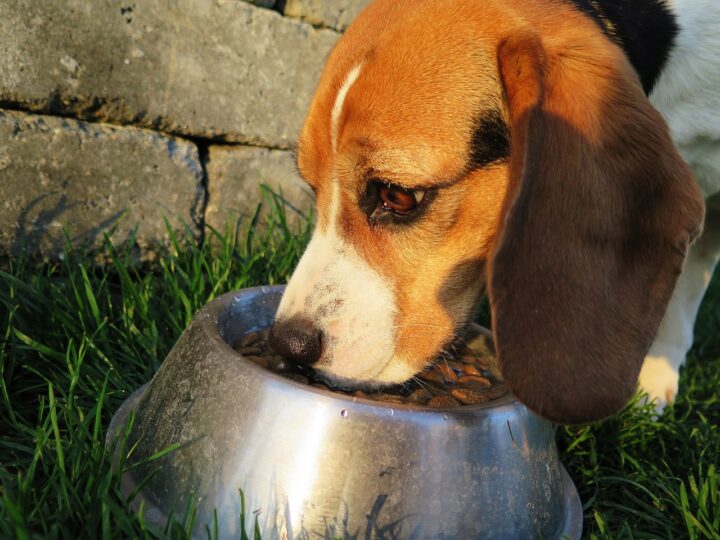 Dogs can sometimes have bad food habits, just like some people do. Each dog is different. While some dogs eat anything that isn’t nailed down, other dogs may be more picky and light eaters. In fact, some dogs will need to be enticed into eating sometimes.

This can be confusing to the average pet owner and it is also alarming when we notice our pet is either gaining or losing weight rather noticeably.

How to Tell If Your Dog is the Right Weight

First of all, it’s important to understand what correct weight is on a dog. All breeds are shaped differently, so you can’t necessarily tell by the shape of their body. If we were to go on the premise that all dogs should have a svelte and tapered waist like a greyhound, we’d starve our bulldogs to death.

A better test is to touch them in the area of their ribs. When there is just about one quarter of an inch of flesh padding their ribs, they are a perfect weight for them.

If you have to really push to feel a rib, they are too heavy and need their food cut back. If bones can be seen visibly, and touching feels as if the bone is just below the surface of the skin, they are gaunt and need to eat more.

The good news is that dogs can gain and lose weight rapidly, so changes in the amount of food is typically going to yield fast results unless you have a very picky eater who is under-weight. In this case, you’ll need to get all the calories that you can into them with small meals. That means finding a nutrient and calorie dense food.

Some of the most calorie dense dog foods are the refrigerated tubes of meat that look like sausages. You can slice a few sections off the tube and add it to their normal kibble and stand back as they swallow it whole. Most dogs will suck it from their bowl, licking the bottom of the bowl until they nearly wear a hole through stainless steel.

What About the Dog that Eats Anything?

Some dogs seem to verge on the point of being pica. This is a condition where people and animals eat strange things, due to vitamin deficiency usually. It can become obsessive compulsive.

Any dog can simply decide that he’s in love with food, mind you. It may have nothing at all to do with his past or how you raised him, in those cases where owners are puzzled because they’ve had this puppy from day one.

Consider that the puppy came from a litter that pushed and jostled for a space at the teet. He may have been one who never quite got enough? In this case, it’s hard-wired for him now. He’ll eat like he’s late to an appointment, likely for his entire life. That’s just what we do at meal time, in his mind.

Eating that fast isn’t safe, so slow him down by getting a specially designed bowl to slow eating in dogs. The bowl may be shaped like a maze in the bottom, making it more difficult to gather the pieces. This helps him to take in less air with his meal, avoiding possible medical conditions such as bloat.

Your crab legs that cost $30 a pound that are on the kitchen counter will become his next snack if you aren’t careful. If he just got meat, don’t worry, he’ll be fine. Did he eat the shell? You may need to worry about the sharp edges cutting his throat, stomach, and intestines. Call the veterinarian right away.

This becomes a hard-wired survival instinct that may be very difficult for your dog to get over because certain behaviors can actually alter DNA after an extended period, scientists have discovered. This means that it could be excessively difficult to change your dog’s way of thinking.

Instead, you’ll likely have to be very careful about what you leave within his reach and you’ll need to measure out his food in the morning and in the evening. It should be mentioned that some dogs need to eat three times per day while others do well on twice.

Puppies may need as many as five feedings per day because they can’t hold much food at once and they are growing at an incredible rate. In their first six months, they can fifty times the size they were as a newborn.

For the dog who will eat anything – puppies in particular – be careful. Puppies explore with their mouths and will swallow virtually anything. Tacks, nails, rubber bands, strings, plastic parts from children’s toys, and even razors have been swallowed by dogs and had to be removed by surgical intervention.

Eating things that aren’t food can be very dangerous and even prove to be fatal. Regulate them constantly, at all ages for the best health.