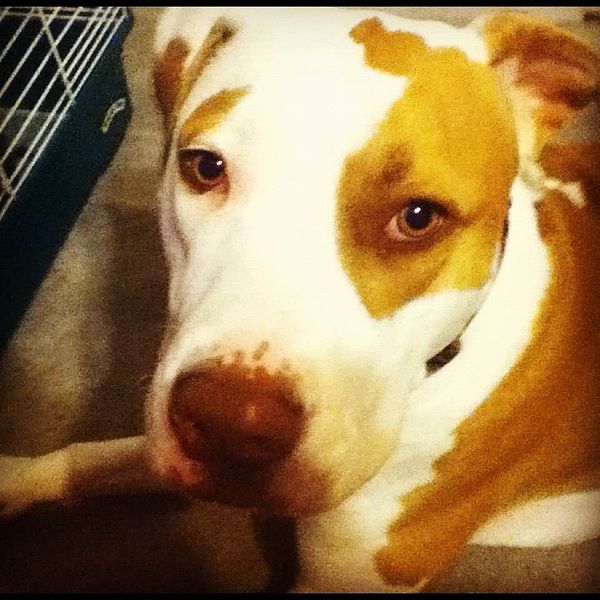 To understand why sleeping spots may be concerned prime real estate to dogs, it is important to understand that they are pack animals. The higher a dog ranks within the pack, the higher his or her social status. This entitles them to first dibs on food, treats, and attention in their world.

Everyone in the household in which the dog lives is considered a pack member by them. They are quick to place everyone in order and visualize themselves within that order. They may see themselves ranking higher than some members of the household.

Some dogs may see themselves as the pack leader and a good trainer can point out the many reasons that this is true … at least why the dog sees it that way. Dogs are very good at getting their way and getting humans to give in to their needs and wants. When we do, they see our vulnerabilities and they use them against us to get their own way.

On the other hand, some dogs will see you as their pack leader and not all dogs aspire to the highest rank via any means necessary. Some dogs have a very submissive personality and they are happy with what they are given and not overly pushy. It depends very much on personality and the combination of the environment.

If your dog views you as in charge, or at the very least, has figured out that you are the meal ticket and the one that gets them what they need, they want to be close to you.

If there are others in the room, the dog may be even more determined to be closest to you as a social hierarchy. The closer he is to you he is, the higher he ranks, in his own mind anyway.

You also provide a sense of comfort and security. You are the meal ticket and the provider. They feel that as long as they are close to you, they are safe. By falling asleep where they can touch you, they know that if you make any move to leave, they will wake and know instantly that you’re moving and they can follow.

In a pack, this is an instinctual behavior to not be left behind. When dogs lay against each other and nap, it is partly to stay warm and cozy and partly to know the instant something is going on. When one is disturbed, they all wake. This is pack mentality. This is instinct. It is a safety net.

Survival of the Fittest or the Smartest?

Dogs are the product of thousands of years of evolution. The fact is that mixed breed dogs tend to be more robust and healthier than purebred dogs. The reason for this is that they draw from a much bigger gene pool, where only the most dominant genes will survive.

When genes compete in a broad competition, the strongest traits are passed on genetically, creating dogs that are healthy and strong, witty and intelligent. Dogs evolve that have the right coat for where they live because the dog that gets too hot or too cold simply will not live to pass their genes on.

Intellect is passed in the same way. Dogs that are the best problem solvers tend to be the best hunters, hiders, and even fighters. They become survivors. Certain behaviors are passed down genetically and some are learned from each other at very young ages as pups are socialized with the pack.

Young puppies stay close to their mom and naturally flock together and stay close. They know, even at a young age, that there is safety in numbers and it is best to stay near those who can protect you. This is a survival skill that is instinctual and beneficial to getting more food, more attention, more protections, etc.

Intelligence is considered part of ‘the fittest’ category. Any animal, from any species of creatures, that can outsmart their prey or their enemies will survive. As the planet changes, those who learn to adapt and change with it will also out-survive their peers.

They live to pass on their genes for intelligence. This creates long lines of intelligent animals that are strong and fit as well.

Scientists have long known that if you throw a handful of purebred dogs together and let them randomly breed, in a few short years all of their descendants will look relatively the same, be the same size and similar colors. Natural selection takes place. Those with the color that keeps them most safe in their environment will pass that color gene.

Those with the right length of fur to match the environment will live through cold winters and hot summers. Those who are large enough to hunt for themselves and fall to less frequently to predators that can easily kill smaller dogs will survive. This process is called natural selection and it applies to behavior as well.

Learning new skills can also be passed on. Chimpanzees, for example, have evolved and learned how to use simple tools in getting ants out of logs. This wasn’t instinctual. At some point, one chimp figured it out and passed it on to others within a family group. They now pass it on to all of their offspring. Dogs can do the same thing.

Wild dogs, for example, can learn to seek dumpsters and use them to as food sources. They teach their offspring that these are places to find food in the city. This isn’t instinct, this is learned behavior…how to climb and get into dumpsters and find their way back out. This is just one small example of learned behaviors that moms teach pups.

This is the term for the human’s tendency to place humanistic traits upon our animals. We see them as children and we tend to think of their actions as being motivated by human motivations. This just isnt’t true. Dogs don’t cuddle on your feet out of love.

They do it out of a desire to know where you are at all times, and to make sure they are never left behind, and partly to know that if you eat anything they’ll be right there for dibs on hand-outs.

Dogs do feel emotions and they are capable of feeling a sort of love and compassion that we once didn’t give them credit for. It is the motivation that is different for animals. Most of the things that they do are out of a need for survival.

Mankind has largely lost his survival instincts. Some people, when lost in the woods, would simply starve to death or die from hypothermia.

Our ancestors were forest dwellers, cave dwellers, and nomads who lived solely from the land. We have spent so many years moving away from those things that we’ve lost our survival instincts and the knowledge of how to live from the land.

Dogs are not yet so far removed from wild roots that they’ve lost their survival instincts entirely. They have gotten a bit soft around the edges though.

They will not have the same response to wild prey as a wolf would. Your dog may bark at squirrels but as many of you have witnessed, your dog has no idea how to catch that squirrel, nor what to do with it if they do. They have a desire to chase it though. This is called their prey drive.

Your dogs do not plan ahead, they do not worry about yesterday, and they don’t put a whole lot of planning into anything. They learn through trial and error.

They repeat behaviors that yield the result that they hope for. In fact, they train you to give them treats in many ways. They are so good at what they do that you don’t even realize you are being trained.

So your dog probably does enjoy your comfort, your warmth and loves you as much as they are capable of. They seek your approval and your affection, but mostly because it solidifies their status within the pack. This is instinctual on their part and nothing more. They want to be higher ranking because it gets them more rewards.

They may seek you out when they are insecure, when they feel like a massage and belly rubs, when they are tired and want to make sure they don’t lose track of you (meaning you can’t sneak in a snack without them knowing it), or just because they feel safe enough to sleep soundly when you are near them.

None of these are bad and you should feel pleased that they choose you as their provider and protector.