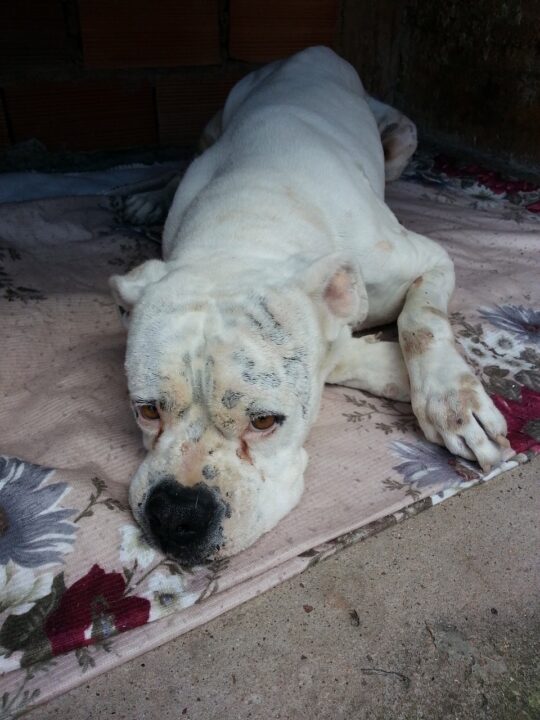 We love our dogs but sometimes they make it hard, don’t they? They will eat anything – even if it isn’t food. You saw him grab it and you couldn’t wrestle it away from him before he swallowed most of it. Your dog ate an ant bait trap and now you are scared, wondering if it will be bad for him. Will it kill him? Will he get sick? Should you call the vet?

You are not alone. Each and every day dogs eat things that they shouldn’t and panicked pet owners call poison hotlines and their vet clinics to find out what they should do. You are in good company.

Don’t completely panic. They are only minimally toxic. While that still isn’t good, it isn’t the end of the world either. Boric acid is one of the main ingredients in these traps. Indoxacarb is another ingredient often seen in them as well.

The reason your dog was attracted is likely the goodies that were also added to attract the ants. Sugar is one of the big ingredients because ants love it. There may even be some peanut butter added to some of the traps. It depends up on the manufacturer, but they add these goodies to attract ants and your dog’s discerning nose also finds them.

While they are mildly toxic to your dog, you can expect that they will vomit. There will likely be stomach upset and possible diarrhea over 24 to 48 hours but should clear up shortly thereafter. If you are not sure about the ingredients in a bait trap and feel more secure calling poison control, they should be able to tell you over the phone and if you need to see a veterinarian. You can also call your veterinarian. They may advise you to use activated charcoal if you have it at home.

Before you call poison control, know what brand the traps were. Also, did the dog eat more than one? Have you accounted for all of them? You will be asked what your dog weighs.

The Hidden Danger Beyond Toxicity

Now that you have breathed a sigh of relief that the traps aren’t toxic, you should also know that the plastic from the trap may cause issues when passing through their system. The plastic is often sharp and can cause internal issues, cutting stomach lining, intestinal walls and the rectum when exiting.

If they swallowed an entire trap, this could be problematic because they could get a bowel obstruction if the trap gets lodged anywhere in the digestive process. This can cause bloat and blockages that are harmful and can cause death. Seek help from a veterinarian if your dog has stopped having bowel movements.

The best course of action would be to watch your dog carefully and leash walk him for a few days until you see the packaging of the trap pass.

If you notice any signs of blood in the stool, notice the abdomen looking bloated, or they suddenly have stopped having bowel movements, seek help at the veterinarian’s office and let them know when the package was swallowed and that you’ve not see it pass.

They will likely take some x-rays of the abdomen to determine where the ant trap is and whether it is in need of surgical removal.

Sometimes if the object is moving slowly but seems to be coming on its own, they will not do surgery unless it looks like it is definitely going to cause a puncture. Your veterinarian will make the final determination.

Many thousands of dogs die each year from bowel obstructions and it can be a very costly operation but life saving and necessary. If blood flow to the intestines is blocked for long enough the bowels will begin to die.

During surgery, the doctor will determine if the bowel is no longer viable and remove any part that is dead. If the bowel is not removed in time, it will begin rotting in the gut and the resulting infection will become septic. This will cause death the majority of the time.

As you can see, ingestion of the plastic may actually be the biggest problem for your dog. Wrestle it away from them at all costs if you can possibly do so. Holding their head in the air with the collar will sometimes provoke them into dropping what they have in their mouth, if you are afraid to put your fingers in their mouth.

Some dogs will aggressively try to keep what they have and if this is your dog, then try holding their collar up in the air until they open their mouth and drop what they have. They will also almost always give up what is in their mouth if you offer them something better.

A treat in exchange for the potentially harmful ant bait in your mouth, please? Yes! This method is called “trade up” and it works 99% of the time. Use it.

It may be worth your time to seek methods of trapping ants and other insects that won’t harm your dog. There are ant traps you can use that work very well. Try using diatomaceous earth (DE) and spread it around your garden and home.

DE is nothing more than powdered shells. While it feels like nothing more than flour in your hand, it has extremely razor-sharp, microscopic grains that slice open the bodies of ticks, ants, roaches, spiders, beetles and any bug with an exoskeleton. They essentially are cut open and die, just from walking through it.

DE is organic and environmentally safe. It will not harm you or any pets. It only is harmful to tiny bugs with hard shells that get cut and scraped by the sharp shell edges that go totally undetected by us. If your dog eats it, it’ll pass right on through like some dirt.

You can also use plastic jugs and put small holes in the tops of them and fill with sugar water. While it wouldn’t be great for your dog’s overall health to get into this often, it wouldn’t be toxic and the plast these are made from is much softer and pliable, unlike the rigid plastic of commercial ant traps.

Some people also swear by leaving fruit in a far off corner of the yard that will bait ants away from the home and keep them outdoors.

Having Emergency Supplies for Your Dog

It is also a very good idea to have things you may need in the home, just in case your dog does get into anything toxic. Listed below are some things that you really should have in case of emergency for your dog.

Benadryl – Yes, the same Benadryl that humans take can be given to dogs. This will come in handy if they are stung by a bee or wasp, get bitten by a spider or just are allergic to pollen. Benadryl can be used as an antihistamine in any emergency that calls for it.

Dramamine – Stops vomiting almost immediately, especially great for car sickness and motion sickness in humans and in animals. Keep in glove box for when you need it.

Activated Charcoal Tablets – If your dog ever gets into something toxic, it is typically better to use activated charcoal than to have them vomit. In fact, vomiting something caustic or that is sharp can do far more harm than good. Activated charcoal, if given immediately following ingestion, will actively surround the toxin and prevent the body from absorbing it and helping it to be moved through the body. It can be life-saving to have it in the house.

A piller – This device is used to give an animal a pill that doesn’t want to take it and swallow. You place the pill at the end of it, shove it in their mouth and as far down their throat as you can and push the lever to release the pill far back into the throat where they have little choice but to swallow. It’s especially great for cats.

Non Stick wound tape – The type of dressing that sticks to itself without sticking to fur will do wonders to help wrap a wound for transport to the vet. If your dog is bleeding and you must cover a wound, this is the tape that you want to have. It also is the best to have for humans because it won’t tear skin and rip arm hair when taken off.

Gauze pads – These should be in every kit, regardless of who it is for. You need these to stop wounds from bleeding, cover topical abrasions and also to clean wounds and so forth. You can never have enough of these, sometimes called four by fours.

Plastic Elizabethan Head Collar – These are used so dogs can’t lick or scratch at wounds, tear bandages off and scratch their heads until they cause bleeding or hot spots. They are very handy to have and you may purchase them for a few dollars at many pet supply stores.

So, now you know that ant baits can make your dog sick but will not likely kill him. The plastic itself could be problematic and you know how to watch for complications from that.

You’ve got some ideas of better ways to rid yourself of ants and you’ve also learned of things you should keep in the house to help treat your dog in the event that you need that he needs your help.

Remember that dogs may bite if they are in pain or very sick. Even the sweetest dog in the world can lash out when they don’t feel well. It’s a natural instinct for them. Use a blanket to handle them and have a leash handy to get them to a vet in any emergency.