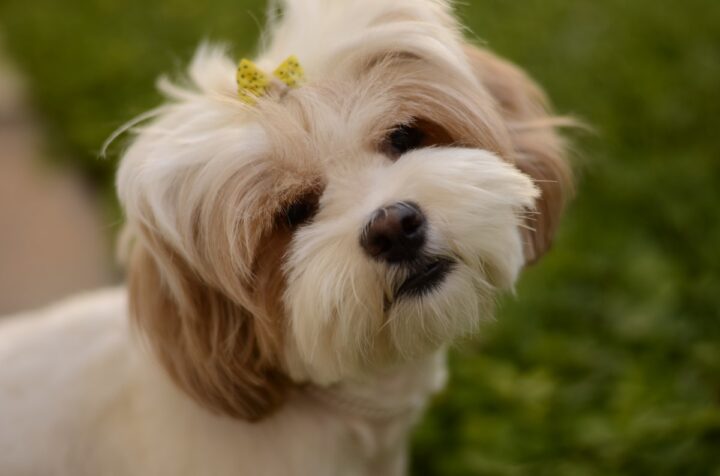 Menopause refers to the time in life when the female body begins to be less focused on reproduction because her eggs are nearly gone and her body begins to slow down in menstrual cycles, or heat cycles when speaking in dog terms. In this respect, dogs do slow down but their experience is different.

The Way they Experience Menopause

A female will typically experience a heat cycle twice per year. Once they reach the age of about 7, she will slow down and only have 1 cycle per 9 to 12-month time frame. Eventually, these will stretch farther apart until she has no further heat cycles. Most females end their cycles around the age of 9.

Aside from seeing the cycles become further apart, there are no other overt symptoms that they seem to exhibit. They likely have some hormonal fluctuations that would be a not be surprising but they do not appear to be of much consequence in their mood or demeanor as most people don’t report ever seeing any changes.

If you talk to a veterinarian about this, they argue for spaying well before the time for menopause would happen. Even if you allow a female to breed, spaying her at approximately 4 years old is beneficial to her health and will prevent further risks of ovarian cancer, uterine cancer, pyometra, and a host of other issues, including false pregnancies that take a toll on her body.

Dogs don’t typically change moods much although they may be short with a male dog that is constantly sniffing and trying to mount them. She will not be receptive to a male’s advances until she reaches the most fertile stage of the cycle. Her vulva will be engorged and becomes spongy in texture. At that point, she’ll stand patiently for the male, moving her tail to the side.

You should not, under any circumstances allow a dog under the age of 2 to breed, male or female. There are many genetic issues that don’t show until around that age and their body isn’t yet ready to carry puppies from a bone and nutritional standpoint either. You could be passing on Progressive Retinal Atrophy to all the puppies and not know until it is too late. These issues begin to show around the age of 2. Hip dysplasia will also begin becoming an issue at that age if they have it. Wait. It can harm her if you don’t wait. It can produce offspring that all unhealthy too.

Most dogs slip into old age with far more grace than humans do. They have fewer ego issues about age and they simply believe in living each day to the fullest. Age doesn’t matter. Most breeds will continue to try doing things long after they are easy anymore.

You will begin to see your older dog slow down a bit, like a car shifting from 5th gear down to 4th. Gradually, they slow and before you know what is happening, you start to see gray hair coming in around their eyes and the ends of their muzzles.

They may get up slower than they used to and take a few minutes to warm-up but will still chase a ball with every bit of zeal that they had when they were a puppy. Dogs don’t understand the meaning of growing old. They aren’t worried about it at all. They are only concerned with living. Humans could learn a lot from them.

Your dog is considered a senior citizen at age 7 for the vast majority of breeds. This is about half of their life expectancy though, so they won’t simply grow old overnight. Don’t worry! Feed them well and make sure they get plenty of daily activity and they’ll live for many years as long as they aren’t met with an untimely illness or accident.

What if I Spay My Dog?

Spaying will likely prolong her life and keep her healthy for much longer. It won’t change the way she ages unless she has complications from not being spayed. Pyometra is an infection of the uterus that is life-threatening and costly to have treated. A total hysterectomy is likely the fix and will need to be done as soon as possible. This infection can completely fill the inside of the uterus and is seen as a pus-like discharge from her vaginal opening. Spaying will prevent this.

If you spay her early in life, she has a far less likelihood of developing cancer of the uterus or breast cancer. It should also be noted that a lactating female runs a risk of impaction of the nipple, known as mastitis in dogs. This is a bacterial infection that causes infection, redness, and swelling of the nipple. She cannot provide milk if that gland is back-up with infection and puppies will have to be bottle fed while she is treated for the mastitis. This is another issue that can completely be avoided if she is simply spayed.

When she is spayed, she’ll slip into old age with no outward signs other than the normal slowing down. Some dogs don’t slow down until they are with a year or two of their life end. Some dogs run up to the day they pass. It is as different for each do as it is for each human being.