There are many popular breeds of dogs to mix together. For example, for many years the poodle has been bred to other types of dogs to create Labradoodles, Goldendoodles, Bernadoodles, Aussiepoos, Mini Sheepadoodle and more. This is simply because the poodle is a hypoallergenic dog which does not shed.

By mixing it with other breeds, it is possible to reduce the shedding of those breeds. While they will not typically be non-shedding, the shed is reduced a great deal.

Other breeds are chosen to crossbreed because of a particular look or color that they have. Dalmatians are a good example of this situation. This breed has a very unique spotted coat that can bring incredible variations to other breeds when mixed together.

The Dachshund is a short-legged dog, small in stature but long in body length. He is bred to chase small prey down into holes. This little dog will take on a badger, a raccoon or any other rodent-type creature living in a hole.

They love to dig and burrow because it is in their nature, but they are also great fun as pets due to the incredible intelligence and sometimes stubbornness that they can display.

The dalmatian history traces back to the land once known as Dalmatia. This dog was bred in the 1800s as a carriage dog. Being just the right height at the withers, the Dalmatian can run underneath the carriage, or to the side. He is naturally at ease around horses and fearless of the carriage.

It is believed that at one time, dalmatians were favored for staying near the carriage and protecting it from robbers and looters that were often thick upon the trails.

Eventually, the dalmatian found favor as a mascot that rode the horse-drawn fire wagons. Again, they had little fear of the horses and were inclined to stay close to the carriages. Due to history, many fire departments still keep a Dalmatian around for the fun of having one in the firehouse. 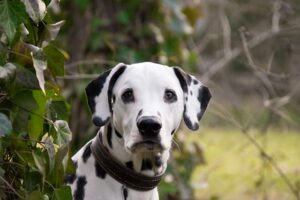 They give the crew a pet to ease their mind when it’s been a bad day, since most fire crews live at the station for a few days before they are off and free to leave.

When the Dalmatian puppy is born, his entire body is white. The spots will begin to show at approximately three weeks of age. Acceptable spot colors are black or liver. The males stand slightly taller than the females when fully grown.

Males are 21 to 23 inches tall at the shoulder and the female is slightly shorter, ranging from 19 to 22 inches tall.

The Dalmatian is a smart, affectionate, and energetic dog. They can easily be trained to do many tasks and they are typically very good with children and thrive in a family. They are classified as a companion dog by the American Kennel Club.

The Dalmatian has a short, flat coat that is easy to groom and doesn’t require much in the way of grooming. They can be wiped off with a damp cloth to retain their shine. A bath every 4 to 6 weeks is typically plenty unless they’ve gotten filthy playing in a field after a rain.

Dalmatians are prone to skin issues, problems with deafness, and liver problems. These are genetic traits that the parents of any prospective litter should be tested for, to help ensure that they are not carrying the genes. Sometimes it still happens but reputable breeders know that these things should be tested for.

Short in stature but huge on personality, this little dog is like a stick of dynamite. They’ve got energy and a personality that tells you they think they are much bigger than they are.

Dachshunds make good watch dogs because they will bark and alert you to anything out of the ordinary. They love to chase and play fetch, even though their legs are only a few inches long.

The Dachshund weighs 15 to 32 pounds, are 8 to 9 inches tall at the shoulders (unless they are a mini, in which case they may stand only 5 to 6 inches tall), and a mini will weigh approximately 11 pounds on average. 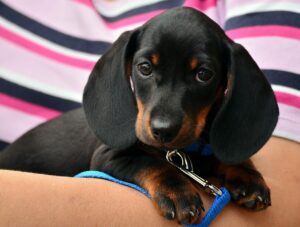 This breed can have a short, flat coat that is easy to care for or they may have a longer coat that is requiring more of your time to keep groomed nicely. The Dachshund is a member of the hound group, as they will hunt prey that is chased into holes in the ground.

The long, low body of the Dachshund is made for chasing right down into the hole of a badger and squaring off with him. They have a fearless personality to suit the job.

In fact, Dachshunds often bite off more than they can chew, so to speak. They can be a bit too fearless and find themselves in an argument with a bear, and typically won’t back down until it is obvious that they must.

They truly have a “I can do anything” personality and will attempt agility if you are so inclined to get them involved in the sport. While they are not the fastest dog, they will still chase a ball and race after it as if they are a greyhound at heart.

Dachshunds aren’t prone to a lot of health issues but they can have back troubles as they age. Please, be very astute at keeping them at a healthy weight. An overweight dachshund will have a lot of issues that cause them to be unable to walk with age.

When you mix a Dalmatian with a Dachshund you may get a long hair or short hair dog. You are mixing a hound with a companion dog, but the Dachshund is also quite fond of their family, so you’ll likely have a very nice companion animal.

Dachshunds are known for being quite independent, so your pup might tend to be a bit of an independent fellow at times, but will be very intelligent and trainable if they take after the Dalmatian’s natural desire to please.

If your pup shows teeth at you, but it doesn’t seem like a snarl at all, you’re probably witness a ‘submissive grin’ and this is a trait of the Dalmatian. It is a dog’s way of showing they are not wishing for a fight and are being submissive to you. Some people mistake this for aggression but if you look closely, it is not meant as aggressive in any way.

You may have a spotted dog, or you could have a merle color that is potentially a Dachshund color, or a solid color as well. You might have a solid color with muted spots too.

The color combinations can get quite amazing and sometimes it looks as if a dog has been put together with spare parts when mixing two breeds that are so distinctly different.

The length of the legs could be quite short, or as long as a Dalmatian’s legs. Some of the cutest mixes are the ones that look exactly like the larger dog but have the tiny legs of the Dachshund, with the long back. You could end-up with an 8-inch tall Dalmatian, in other words.

Genetics are very hard to predict. There is no way of knowing which parent the litter of puppies will favor. In fact, many times the pups will all be a bit different and this can be quite fun seeing all the different combinations from the same parents.

Just remember that your puppy is going to need training from day one. You’d do well to read a bit about both breeds from those who’ve kept them or breed them.

You’ll be able to pick out traits as your dog grows and shows his true personality. Only as you get to know your dog will you begin to see whether they take more after the Dalmatian or the Dachshund in their blood.