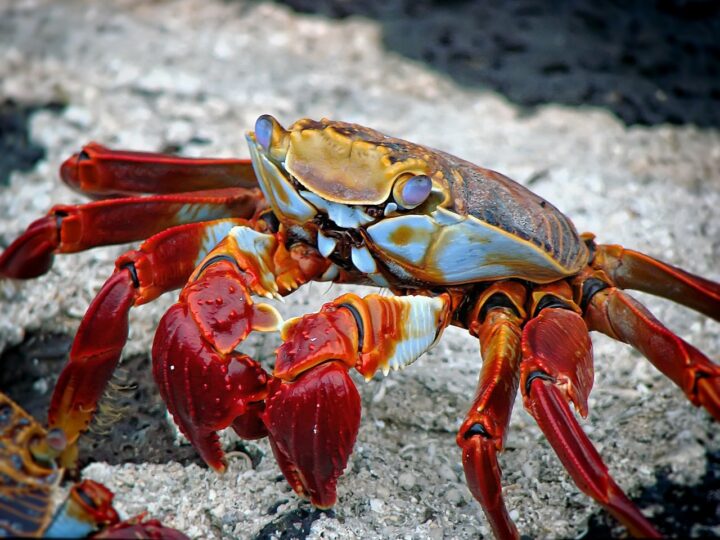 Dogs are omnivores but protein is a very good source of energy for them. They don’t exist totally on protein, but when they can get good sources of lean protein, it is fantastic for them.

Crab might be a little expensive, and you don’t want to drench it in hot melted butter, but some crab meat for them once in a while is a perfectly acceptable form of protein in their diet. Since all seafood has some toxins at low levels, it is always suggested that you don’t eat too much seafood.

For that reason, you don’t want to feed them too much crab meat, but a few times a month wouldn’t be enough to cause them any harm.

Dogs can be surprisingly picky, especially when you are offering them something they’ve never had before. You may want to give them a tiny amount, mixed into the food that they normally eat each day. This will help them to understand it is a food source and that it’s okay to eat.

If they like it, you’ll know. Don’t be upset if you offer them a food item and they won’t eat it though. It happens. Dogs aren’t too different from children in that respect.

They are leery of things they have never had and sometimes, if they are not used to fish, something like crab might just be more than they can handle trying all at once. Mix new foods into the things they are used to and they’ll be more apt to try it.

Every dog is different and you ultimately know your dog the best. Some dogs will eat anything that isn’t nailed down to the floor and practice an ‘eat now and ask questions later’ philosophy toward life. If that is your dog, then perhaps you can give them plain crab and fully expect them to eat it.

The crab needs to be cooked to make sure it is totally safe for your dog to consume. Don’t ever feed raw meat to your dog. It’s not a healthy practice regardless of what you have read anywhere. There is a lot of risk in giving them salmonella in raw meat or even worse from sea foods.

They can also get types of worms from raw meat. It’s best to make sure that anything you feed your dog is cooked properly.

You shouldn’t cook your dog’s crab meat in butter, or with a lot of oil, breadcrumbs, sauces or seasonings. To do so would be to make it not a healthy form of protein for them, now loaded in unhealthy fats. Keep it lean.

Steam it with fresh vegetables for them, by all means. Add some greens with the crab to their food dish. Keep the cream cheese out of the mix for the dog.

A crab roll may not necessarily be the best choice for Fido. If something like this is given once in a blue moon, so to speak, then you may get by with it, but try to keep it healthy for your dog. He needs you to make healthy choices for him.

Other Ocean Foods for Dogs

Dogs can have all forms of fish, sea cucumbers, seaweed and shellfish. There is no reason to believe that your dog won’t be fine if they eat any of the above. Rarely, a dog might be allergic to a new form of food. Be prepared. Have Benadryl in the house and give them just a small amount of something they’ve never had before.

It should also be noted that food allergies can develop at any time. If your dog had shrimp last year and was fine, doesn’t mean that he won’t have a reaction to it this year.

Food allergies are actually fairly common in dogs. Many of them have adverse reactions to beef or chicken. Some dogs have wheat allergies and some dogs can’t have eggs. You won’t really know what they are allergic to beforehand so you should just always be prepared.

When you are giving your dog meat,  varieties, they should be unseasoned and not marinated in anything. Don’t give your dog things that have had spices added to them as some spices, such as cinnamon, are quite dangerous for dogs. A dog shouldn’t even inhale cinnamon. It can cause very bad breathing issues for them.

Giving your dog some tuna, salmon, or trout is acceptable and leaving the skin on cooked fillets is also fine for them. Don’t let them have any pieces with bones because of choking risks. Dogs really do not do well eating bones.

Read about Can dogs eat crab?

Adding crackers to cooked salmon, as in salmon patties, shouldn’t be given to dogs unless the crackers are unsalted. Dogs can get salt toxicity and the effects are severe. It can cause them severe harm. Stay away from seasonings completely.

By this point, it should be quite clear that foods that are perfectly safe for humans may not be so for dogs. Without knowing exactly whether something is safe or not, you shouldn’t let your dog have it. Be safe so you don’t have to be sorry.

Dogs don’t have to have the same boring food every day of their lives. You should introduce new foods slowly though and when you add a special treat to their diet, try to mix it with food they are used to so that their bowels don’t get upset. They can sometimes have digestive upset when their diet is changed abruptly.

Diarrhea and gas are not fun to deal with when your dog is the one that is sick. If you know that your dog has a very sensitive stomach, then only a bite or two of crab meat should be your maximum giving.

Don’t make your dog sick. It isn’t fair to him because he doesn’t know these things will upset his stomach and then he has to pay with the sore belly or the upset bowels.