“What’s going on?” you wake up to the sound of pitter-patters across the room. You try to open your eyes but you’re scared that whatever’s running across the room might run over your face. “What do I do with you?” you utter. “Oh, I need some effective ways to calm down this hyper cat!”

You might feel like the world’s ending every night your fluffy friend decides to practice for the London Marathon. You might think someone’s flipping the switch on her and making her go bonkers before you’ve even had your coffee. Who’s got time for that before a morning dose of caffeine!? 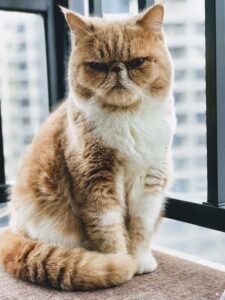 And, you might think your furball’s only goal is to wake you up at 3 a.m. every single day. But, she doesn’t. Chances are, she’s a normal feline with normal feline behavior that reads “crazy” or “hyper” because you don’t know what to do when that happens.

What’s normal about a cat that meows your ears off at ungodly hours? As a matter of fact, most behaviors your kitto displays are a part of her purrsonality.

And about the arched back, ears glued to her head, staring at you, ready to attack. Oh, you thought you were getting a picture-perfect kitten that doesn’t do anything other than snuggle, cuddle, and purr her days away?

Oh, think again, because your mischievous monster’s got other plans! But don’t worry – we’ve gathered a bunch of effective ways to calm down a hyper cat that might help you out.

“What are some effective ways to calm down a hyper cat? My kitty spends most of her days running around the apartment, knocking things down, and causing mayhem. What do I do?”

Cats tend to behave that way when they’re bored and looking for your attention. So, one of the best ways to deal with a hyperactive cat would be to provide her with plenty of playtimes.

We’re talking hours and hours of playing with different toys that stimulate her hunting instincts, elicit “the chase” in her, force her to work harder (puzzle toys), and keep her engaged.

And, granted that you have a kitten, you should expect that she needs A LOT of attention from you. Kittens and cats prefer to play with someone rather than on their own.

And, on the off chance that you have something better to do (how rude!?) you can keep her wrapped up with bird watching on a window purrch.

Oh, what’s more effective than getting your little hyperactive beast a friend to be hyperactive with!? We’re kidding! More times than not, a kitten that’s running around, seeking attention, and causing trouble just needs a curious companion (granted that she doesn’t already have one).

But, that doesn’t mean that you should come home from work one day and surprise her with a cat! As a matter of fact, that’s probably the worst thing you could do.

Cats are creatures of habit and don’t do great with change. Your furry friend might become even more hyperactive to demand your attention!

Rather than creating a traumatic event, take your hyperactive kitty to the shelter to visit and gradually introduce her to other (equally hyperactive) kittens.

Get her a furry friend she actually likes. That way, she’ll be way too distracted with her buddy to have the time to munch on your eyebrows at 3 a.m. every morning!

She’s been throwing glances at your portion of tortilla for a minute? Now, we know you can’t say no to that pouty snout and those melodious meows. But, you’re better off making her work for her food as an effective way to calm her down.

First things first, you’re going to glue her attention to something other than meowing your ears off. Plus, you’re going to make her feel like she’s hunting and earning her food. (Can you tell that playing on her hunting prowess seems to be a great strategy for pretty much everything?)

Here’s a handy tip. Get yourself one of those treat balls and use them every time you’re feeding her something dry, hard, or crunchy.

If you don’t know already, treat balls are hard, plastic balls that have a bunch of holes. And, to eat out of them, she needs to push them around and paw at them!

When wondering about ways to effectively calm down your super hyper cat, your mind might go straight to vets, behaviorists, and calming solutions.

And, calming solutions can do wonders for your boisterous beast. But, make sure you get the green light from the vet or behaviorist. Calming solutions come in various shapes and sizes, from calming sprays collars, to chews and supplements.

Depending on what your furry friend’s comfortable with, get your hands on one or a few of them and observe her behavior go from “No, kitty, don’t climb on there!” to “Aww, look how peacefully she’s napping!”

Most of these items have pheromones and other calming agents that reduce stress and appease a neurotic kitty!

Oh, there’s a thin line between pretending like there’s nothing wrong and encouraging bad behavior! First things first, there’s nothing effective about turning a blind eye whenever your floof gets “the zoomies” or starts knocking things down while you’re in a Zoom meeting.

On the other hand, there’s nothing LESS effective than encouraging bad behavior by letting her have whatever she wants to calm her down. Trust me, when you give her treats to stop her from running from one room to another, you’re not “calming her down,” you’re making matters worse.

You’re teaching her she can get what she wants whenever she displays hyperactive behaviors. Oh, just because she’s calm while munching on something doesn’t mean she’s no longer hyperactive.

Make sure you address her hyperactive behavior, get her the help and training she needs, and provide her with lots of love and affection. And, “boom bow, that’s how you fix that!” (because there’s a TikTok sound for every situation your four-legged friend creates!)

About us: Cats Chef is a website every cat-parent needs to know about. With us, you’ll feel like you’re a member of a support group where everyone actually gets how you’re feeling. Living with a cat can be difficult, but with our help, your stress-level will finally reduce.