There are many variations in the colors of dogs. Even in some breeds that you don’t associate different colors with because they may not be as common or they’ve recently been developed through years of selective breeding by those who are developing their own line of a breed. 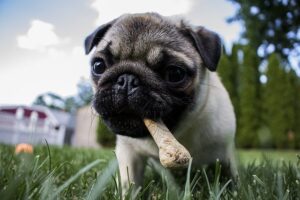 This has happened with Labrador Retrievers that used to only be either black, brown, or yellow. You can now find them in a silver color that is Weimeraner-like. You may have never seen a pug in any color but yellow or fawn, but they actually do come in black as well as brindle. Brindle is the least common color but they do exist.

1) Brindle is the rarest of all pug colors. It is a striped pattern of blacks, browns, and cream all blended together as muted stripes that can look like a dark brown from a distance. Other dogs are more commonly brindle. These include Boxers, Great Danes, Staffordshire Terriers, American Bulldogs, and many more.

2) Brindle Pugs are not a separate breed, only a color variation of regular Pugs.

3) Brindle Pugs are not weaker than others as some myths say. They are just as hardy as any other color of Pug that you may see anywhere.

4) Brindle is not considered a color, it is a pattern variation of the coat. It’s a striped pattern that is muted and many breeds of dogs have this variation in their coat.

5) Brindle Pugs are indeed pure breed Pugs. While the brindle may have been bred into their line through a cross-breeding at some point, it is likely this happened 20 or more generations in the past and your Pug is absolutely 99% pure Pug.

6) Brindle Pugs can change slightly in color from puppy to adult. It typically doesn’t change drastically and quite often remains the same. It might vary in terms of light to dark. Overall, it doesn’t change and you can expect the brindle to stay with them for life.

7) Some people think that Brindle Pugs don’t have the black mask that is so commonly present in the fawn color variation. This isn’t true, the black mask is there but not as visible against the darker brown brindle pattern.

8) The thumbprint of black hairs on the top of the Pug’s head is still there as well, but can’t really be seen. Pugs also have a line of dark hair that grows down the middle of their back as they age. This is called the Trace and it cannot be seen in Brindle Pugs but this doesn’t mean that it isn’t there.

9) Brindle Pugs have been rumored to be less healthy than other Pugs. This is not true. They are every bit as healthy as other Pugs and live just as long as the average Pug, with no more or fewer issues, comparatively, than other Pugs.

You shouldn’t treat your Brindle Pug any differently than any other Pug. They will eat the same, require the same amount of exercise (not a lot), and need training like any other pup.

When you are seeking your first Pug, don’t buy from a pet store. Don’t make your purchase from a breeder that isn’t highly recommended and who has done the first puppy shots.

You should visit them and observe the personality of both parents when you can. This is an important determining factor for the personality your pup may inherit from either parent. 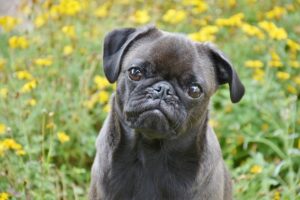 Pugs, as a general rule, are great with kids, have wonderful personalities that can be very comical because of the facial expressions they are so well known for. Their round face lends itself to some human like features that make us laugh at their antics.

Take special care to not let your Pug get too hot outside as they are prone to heatstroke and other issues that result from their brachycephalic snout. It’s short and cramped which causes them to snore, have difficulty breathing at times, and overheat very quickly.

Pugs are very cute and playful puppies that are very intelligent. They can learn many tricks but you may find them to be less than cooperative to learn unless you’ve got a reward for them.

They are smart when it comes to offering up their services without payment of some sort. Some may call them stubborn? Truthfully, they are very food motivated. Give them a reward and they’ll do anything for you.

Children and Pugs tend to get along really well as they are not known for aggression at all. They are a companion dog that has, as a breed, put up with many a tea party dressed as a princess. 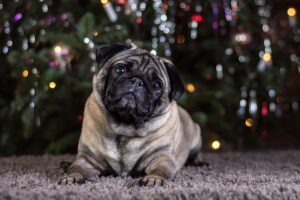 Pugs are the 28th most popular dog in America, according to the AKC,  and it is their good looks and charm that has them so high on that list. They are comical and people simply love having them around to lighten the mood and brighten the entire day.

You can trust them to always be friendly and happy in your presence but they don’t always do well with other dogs unless they are socialized well from day one. If they have been around other family pets since they were puppies, then they tend to do much better than those who have not been socialized well.

No matter who you are, a Pug can fit into your lifestyle too. They do really well in apartments and adapt to life in RVs for those who are retired and traveling.

They are small and have low exercise requirements, so they are easy to keep and adapt to any situation. They also have a very short coat that is easy to maintain, but they do shed. They’ll need some brushing, especially at certain times of the year. 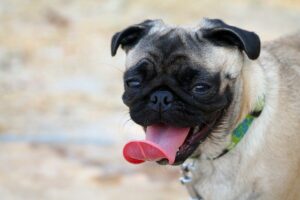 Pugs are pretty easy to potty train most of the time. Be consistent and patient when they are little, reward them for getting it right by taking them outside and waiting for them to do their business and tell them how good they are as you reward them. It won’t take the food-motivated Pug to understand the right thing to do.