While this is a great question, they are neither of these things. Horses are considered herbivores. In other words, they only eat plant material. How can you tell? For one quick method, look at their teeth. Horses have gigantic molars that have a large, flat surface area.

This is for pulverizing plant matter, crushing it like a grain wheel for their digestion. They lack sharp canine-style teeth that are for shredding meat; the tell-tale signs of a carnivore are teeth meant for slicing and shredding.

When you compare the teeth of a dog to the teeth of a horse, it is very apparent to even the novice that these two animals do not eat the same thing. A house cat is a carnivore and thus you see the fangs when they yawn. 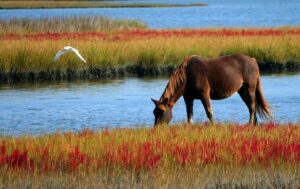 Those teeth are designed for the quick dispatching of any prey caught in those backward angled blades they have, which we call fangs. They are precision tools that enable them to catch and kill a mouse in mere seconds.

What Is An Omnivore?

Any creature that eats both plant and animal food is considered an omnivore. This means that they need a bit of both to get the nutrition that is essential to their body.

Humans are actually considered omnivores. While there are some humans who choose not to eat meat, they often have to make changes in their diet to include other foods that have higher levels of protein to meet the needs of their bodies. 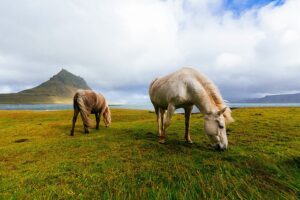 Many primates are omnivores. They’ll catch some small prey animals and eat them, but largely stick to eating leaves. The large jaws of the gorillas are from the muscles developed from a lifetime of chewing on leaves nonstop. Don’t let that food you, he will eat meat on occasion.

Humans have evolved to hunt, forage, and farm for food. We will quite literally eat anything. Sometimes our diet isn’t ideal as many humans are unable to drink milk due to an inability to digest it. Milk is truly not part of our diet, though many have been able to adapt to drinking it.

What is a Carnivore?

A carnivore is an animal that survives solely on a diet of meat, gaining his nutrients from the animal he consumes. In order for this to work, the carnivore typically eats an animal that would be considered an herbivore. Their body will be filled with the plant materials they have consumed and in this way, the carnivore gets his well-rounded diet.

Very few true carnivores exist. Lions and bears are considered carnivores, though a bear can be caught eating the occasional berries. Their diet mostly consists of animals hunted and consumed raw. House cats are largely true carnivores as well, just like their big cat ancestors.

What is an Herbivore?

As stated previously, herbivores are animals that graze for their food. Cattle, deer, horses, and wild gazelles are all examples of herbivores. These also tend to be herd animals, which are prey for carnivores. Such is the circle of life.

What Do Horses Eat?

They will then move off behind a bull elk that is considered to be the leader by virtue of his size and skill in being able to fight the other males for his role. Where he leads, the herd will follow. Horses are much the same, always led by a stallion in the wild. Domesticated horses rely on humans to provide food and pasture for them. 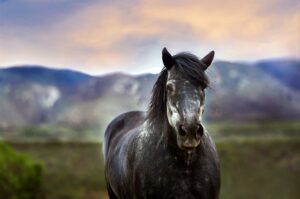 Their diet consists mostly of good quality hay and pasture grass, with some small amounts of grain added as a treat but it must be a diet that is not too rich or sweet. They can upset their digestive system quite easily, leading to bloat. This can be serious for horses.

Could Horses Be Omnivorous?

There are many arguments over this in the horse world. In short, yes, horses can and sometimes do eat meat. In fact, video exists of horses on a farm eating small chicks, plucking them from the ground, and snacking on them as the hen tried to fight them off.

While it was fairly grotesque to watch this video, it was a prime example that nearly all animals will eat what is available when they are hungry. Also, it is proof that you may not want to allow chicks to run around under the feet of horses.

In some parts of the world, horses have been taught to eat meat in small quantities and may have eaten meat in times when that was simply what was available.

Can You Feed Meat to a Horse?

When you disrupt the digestion of a ruminant – animals with stomachs in more than one compartment, which includes most grazing animals, you risk causing severe stomach upset. A ruminator that has an upset stomach can fall ill quickly and bloat is a condition that can kill them.

They cannot belch to release gas from their stomachs as humans do, so when these gases build in their stomachs it leads to severe bloat. Veterinarians will often need to intercede by placing a tube down the horse’s throat and relieving the gas and helping them to bring up the food that is causing their digestive issues.

This is not fun for the human or the horse.