The Husky is also known as the Siberian Husky, breed for his stamina, strength, loyalty, work ethic, friendly demeanor, and thick coat.

Many people love the breed for their antics and their beautiful markings but know very little about the breed.

Let us take a closer look at the Siberian Husky. 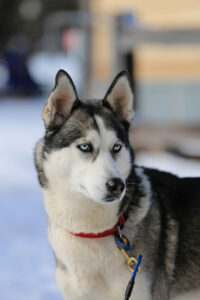 The Husky is known for its many color schemes and patterns. They may even have variations in eye color. A list of husky colors includes:

Huskies can have eye color variations from blue, silver, brown, and amber. It is permissible for them to have one eye of two different colors.

This can sometimes be called a ghost eye and is not considered a fault in any way.

Piebald and Splash pattern both refer to the ways in which the colors of the coat are presented on the body.

Piebald has mostly white, interspersed with color whereas splash is more of the color with less white or possibly cream.

Agouti is a very dark color with wisps of lighter color showing through it in the undercoat.

Contrary to one of the other colors being called ‘wolf grey’, the agouti color is potentially more wolf-like in appearance.

It is also not one of the most common colors for the Siberian Husky.

Their coat is very thick, and the husky has an undercoat that grows very thick in cold weather.

In northern climates, the husky thrives due to the undercoat that insulates it from the cold and the outer coat, which is a barrier to moisture, such as snow and protects against pine needles, thorns, twigs and is almost impenetrable by normal brush because of the sheer thickness.

In warmer climates, such as anywhere in the United States, especially in summer, the husky will shed heavily at least once per year, sometimes twice.

This is referred to as ‘blowing their coat’ and this is the undercoat thinning out so that they are comfortable in warmer weather.

Their fur will float through the air as it comes loose and this requires regular brushings to pull all of this dead hair out if you don’t wish to live with a snowstorm of fur for several weeks.

Many owners of huskies prefer to take their dog to a groomer who can use a blow dryer that is designed specifically to powerfully blow the loose and dead hair from them.

This essentially makes the process happen in a few hours, versus several weeks.

Your husky will still shed normally when you take him or her home, but you will likely not have hair blowing through your home like tumbleweeds in an Arizona desert.

When the undercoat is absent, the agouti-colored husky changes in appearance somewhat and is darker and appears to be a dark gray solid color again.

As the season’s pass, when cooler autumn breezes begin to blow, the undercoat will fill back in and you’ll see the return of the color you are used to. 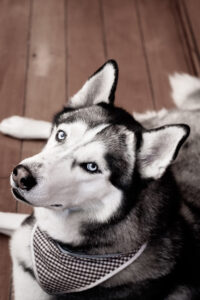 • Brush your dog daily. The average husky sheds all the time and very heavily a couple of times per year. The shedding is an arduous process that requires that you have patience and invest time in regular brushing to prevent mats from forming and stimulate the skin underneath to excrete healthy oils that move through the coat, keeping it shiny and shedding water.

• Do not bathe more than once per month. The husky doesn’t create a lot of oil in their coat and doesn’t have a lot of natural smell because of this. Bathing your dog too frequently will strip what precious little oil they have. Brush them daily, and you’ll note that they always look nice and clean.

• Do not trim whiskers or hair inside the ears. Huskies need the hair in their ears to prevent debris from entering the ear channel and causing dirt to build inside. They need their whiskers as well. These prevent them from shoving their head into areas it won’t fit. Their whiskers act as a way of sizing things up and making sure they protect their face.

• Use a comb to break up mats. Don’t pull on them with a brush. This hurts and can also leave bald spots in the area. Gently pick them apart with a comb until you are able to get a brush through them.

• Use a coat conditioning shampoo. Using a good shampoo and products that can be massaged into the coat during bathing can help to keep the coat shiny, less matted, and healthy-looking.

1. Agouti refers to the color of the Husky and nothing else. They have banded hairs that have several different colors stacked on the hair. This is genetic. A melanocyte-stimulating hormone is competing with a peptide that is called an “agouti signaling peptide” and this causes the agouti coloring. It looks somewhat dirty and their lighter areas and it is a very complicated color.

2. The Agouti Husky is more often mistaken for a wolf than other Husky colors. The color makes them have a very wild and dirty appearance, even when they are perfectly clean. The Agouti is perhaps the most wolf-like-looking domesticated dog on the planet?

3. The Agouti always has lighter rings around their eyes, like small, round eyeglasses. If you are unsure whether a husky is an Agouti Husky, look closely at their eyes, but be careful because you might just fall in love.

4. While they have rings around their eyes, they also have another distinguishing feature. The rest of their face is also much darker in comparison to other Siberian Huskies.

5. Even though they look a little different, they are the same as any other Husky. The Agouti is sweet, playful, and incredibly intelligent as are all the colors of Husky.

Don’t leave them unattended for long because they will definitely find something to get into. A bored Husky is a naughty Husky.

Often called Houdini dogs, the Husky seems to have an incredible ability to escape from anything. They can open locks and turn doorknobs, consider yourself warned.

6. The Agouti Husky has a color that extends further down his legs than a typical Husky does as well. This leaves them looking more like a wolf in appearance as well.

7. The Agouti gene is considered a wild dog gene. It may be more genetically linked to wolves than any other canid gene.

The agouti gene is present in only a few other breeds as well as a few other animals, all of which are wild. These include rabbits, deer, rodents, and wolves.

8. Agouti Husky lines are more closely associated with working line Husky breeding as well. When you have a heavy job, the Agouti Husky may be a bit stronger and sturdier to handle that job.

They can also be trained to do a large number of tasks because they are so intelligent. This is an extremely intelligent dog.

9. Agouti Huskies are not easy to find, but some breeders are now specializing in them because people are learning about them more and finding them desirable for being different.

They make a beautiful dog, for certain.

If you are looking for one of these dogs, there are rescues out there who specialize in the Husky and would probably have an Agouti Husky available for adoption, if you are interested in an older dog that has already been potty trained, this is the best way to go.

In fact, you might get lucky and find a really well-behaved senior dog who still has many years left but is more mellow and all finished with the puppy chewing and escaping years.

Considering the fact that they have a double coat, the husky really requires very little maintenance compared to similar breeds. Brush them, never trim them as it is bad for them.

Trim their nails, clean their ears once a month or more if necessary, but never trim the hair from their ears or their face.

You should also start doing these things from puppyhood on. The sooner you practice grooming with your husky, the faster he will be content to stand and allow you to take care of him without complaint.

Some dogs do not like their feet messed with at all and get nippy over this type of handling.

Playing with the feet of your husky puppy right away and teaching him to enjoy this as part of bonding and snuggling will make grooming far easier as he grows.